Gazprom (Gazprom) recently signed a General Terms and China National Petroleum Corporation, to supply natural gas from Russia to China through the Eastern pipeline. Chinese President Xi Jinping met with Russian President Vladimir Putin in St. Petersburg on September 5, 2013 and witnessed the signing of the agreement in the subsequent G20 meeting. 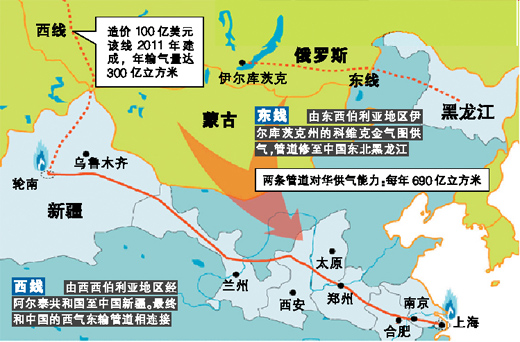 According to the agreement, Russia will deliver 38 billion cubic meters of natural gas to China each year for 30 years beginning in 2017. The initial investment cost of the project is estimated to be 60 billion US dollars. It will be supplied via the Sino-Russian Eastern Line gas pipeline, connecting Irkutsk region to Yakut-Khabarovsk-Vladivostok.

The two sides have reached an agreement on the export volume, the starting date, and the conditions for paying off the bill, but the prepayment amount of PetroChina as a buyer has not yet been disclosed and it is expected that the final terms will be signed before the end of this year. Since the signing of the strategic cooperation agreement in October 2004, CNPC and Gazpromâ€™s natural gas negotiations have been going on for nine years. During this time, the preparation of the gas supply schedule has repeatedly been delayed. The reason is that the price is difficult to come by.

A person familiar with PetroChina once told reporters that China hopes that Russia's exports of natural gas will be cheaper than Turkmenistan, but Russia hopes to agree with the gas prices sent to Europe. The two are very different. It is understood that the current CIF price for natural gas in Central Asia is 2.5 yuan/m3, and the price for Russia's exports to Europe is about 3 yuan/m3.

Moody's also believes that although the two parties have reached an agreement on export volume and transportation routes, prices are still the problem. The new agreement will not be linked to the relatively low price of natural gas at the Henry Hub in the United States, which has a positive effect on Gazprom. Gazprom has been selling natural gas in Russia near natural gas prices at Henry Hub, but it has sought premiums in projects in the Far East including Japan.

It is reported that after many rounds of negotiations, the gap between the prices of China's and Russia's natural gas per 1,000 cubic meters has narrowed to less than 50 US dollars. In addition, China may have to pay a prepayment of US$250-300 billion to provide interest-free funds for Gazprom's Eastern Airlines gas supply plan.